We had a hectic morning as we rushed out the door headed for Thomas Hospital, the rehab facility where Annadelle is now doing her physical therapy. Today was her first day there so of course we had another evaluation. Our time seemed to fly by so we only had a little bit to meet one of our PTs, Lisa.

Long story short, we were able to set up a daily PT schedule with them to include Friday pool days. I know Annadelle will be so excited about that. Unfortunately the only opening they had for OT was at 7:15 am daily, so we won’t be stating OT there yet. We have been put on a waiting list for a later time. I need to call USA tomorrow to st up her OT in the meantime.

I also need to remember to call the orthotist to see if he received any more info about getting her a SPIO vest. We were originally told we would be fitted for it through our PT but that didn’t seem to make much sense. Why even go through an orthotist if your PT would order it? Chad at Eastern Shore Orthotics was suppose to be checking on it but I haven’t heard back from him, so I’ll make a follow up call tomorrow.

That seems to be the norm now. I have to make a lot of follow up calls regarding equipment or appointments because it is so hard to get someone to call me back. I feel like I spend a lot of time playing phone tag. Meanwhile, she doesn’t have the equipment she needs. I know other parents hav been having the same issue. 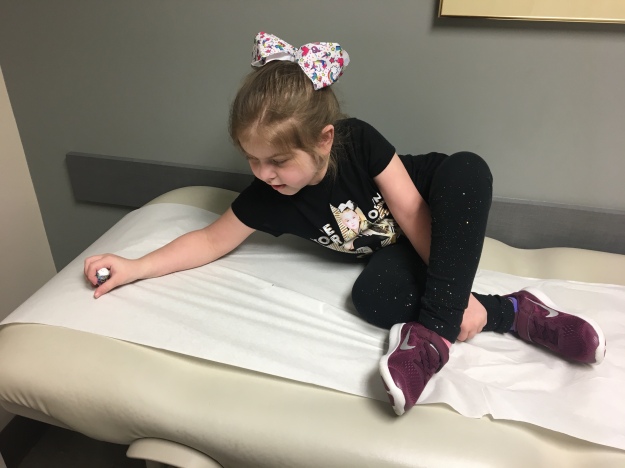 Later on in the day, we drove to Mobile to see Dr. Sindel, a pulmonologist that we were referred to after our last hospital visit at USA Children’s and Women’s. Initially we were not impressed with him, but after a few minutes of talking to us he opened up. We explained AFM, as we always do to new doctors. It seems at times that we know more than they do about it.

Dr. Sindel talked to us for a bit about the comparison of polio to AFM. As it turns out, during his residency, his attending was the last doctor in the US to diagnose a case of polio. He said because of that he had always been intrigued with it, and he also has a family member who had polio. He said his relative still has residual problems but has lead a normal life. She is able to walk after having a tendon transfer.

Annadelle went through a breathing test and had an X-ray done. Dr. Sindel told us that if he wasn’t aware that Annadelle had AFM, her test results and clinical presentation would be that of a normal child. Basically, he did not note any deficits in her breathing.

Y’all. I was furious. Although I am no expert at reading xrays, I always ask to see them when Annadelle has one. When she was admitted at USACWH back in October, she had an X-ray daily, including when she developed pneumonia. The PICU doctors went over these xrays with us extensively and I was learning a little bit about what to look for, such as cloudiness or an unclear view of her diaphragm.

When she was admitted this past month, I looked at the X-ray they took upon admission and told Chris I thought it looked pretty normal. I told him I didn’t notice any cloudiness but I did see a line in her right middle lobe. It was very noticeable. When the ER doctor came in to inform us she had bacterial pneumonia, I was very surprised. I questioned her about the X-ray and asked her to pull it up and show us again. Over and over we were assured it was bacterial pneumonia, so she was started on IV antibiotics.

Every single day we were in the hospital, I asked for an additional X-ray. I was denied every time because “she has had too many xrays.” And yeah, I get it. We don’t want to expose her to unnecessary radiation. I know that. But once Dr. Estrada told me he didn’t believe her to have bacterial pneumonia and that his opinion differed from the attending, I questioned it even more.

Basically I say all this because I am mad at myself for not advocating harder for her. I knew something was not right with the X-ray and I should have insisted on another one. When I learned today that she had been put through an unnecessary IV (twice!) and we spent a week in the hospital for nothing, I felt so guilty for putting her through that again. Dr. Sindel told us that had she had another X-ray, it would likely have shown rapid improvement, as a collapsed lung normally heals itself quickly within a day or so.

If you take anything from my post, I want you to remember to always trust your instinct. You know your child better than anyone else, no matter how many medical degrees they may have. Before Annadelle was hospitalized for the first time in October, I listened to people I trusted who told me I was just being paranoid, a hypochondriac, that I was worrying for nothing. Over and over I had the same conversation with numerous friends and family members, some of which even have medical degrees. I should have listened to my instinct because if I would have, she may not have been affected to the extent that she was.

Anyway, I’m salty about our recent hospital trip, but not as bad as I probably should be. I’m thankful she is better and I would rather have been safe than sorry. I just hate that we subjected her to more and more pain when it wasn’t necessary.

For now I’m just praying. And praying. And praying some more. Praying for patience, comfort, guidance, but most of all healing. I am working hard to focus on God’s promise that what we ask for in prayer we will receive. I remind Him of that every time I pray.

Would you mind praying, too? Annadelle’s Army has been hard at work. I just ask that you don’t forget about our sweet girl. Her journey to health is far from over, and we need the support now more than ever.

Thanks for everything. I truly mean it.

This site uses Akismet to reduce spam. Learn how your comment data is processed.

Take a Look Back