We had another busy day of therapies today, including acupuncture. Annadelle was much more cooperative today than she was yesterday. I think she may not have slept very well the night before and that may have contributed to her unwillingness to complete tasks assigned by her therapists toward the end of the day.

Today she was able to stay on task for the most part. She’s five, so of course she is easily distracted, but she does a lot better than I would imagine a lot of kids her age would.

Nothing remarkable happened in therapy unless you count our OT telling us that Annadelle’s right shoulder is extremely weak. Initially she thought it could be her core muscles that were keeping her from lifting her arm, but she asked another therapist to watch her and give her opinion. That therapist said Annadelle was definitely having difficulty with her shoulder, meaning we have to continue to work to increase strength in that arm. Our roomies suggested we ask for a consult from the brachial plexus injury clinic at Johns Hopkins so they can “score” her. I don’t really know what that means but I am going to ask about it tomorrow morning in rounds. 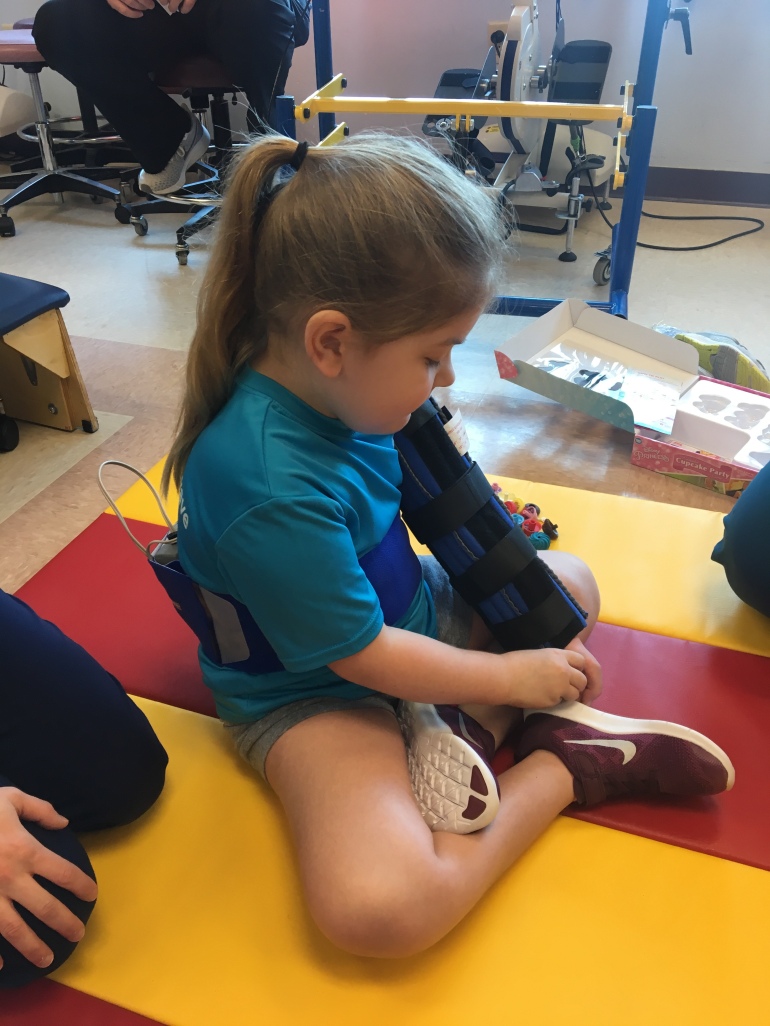 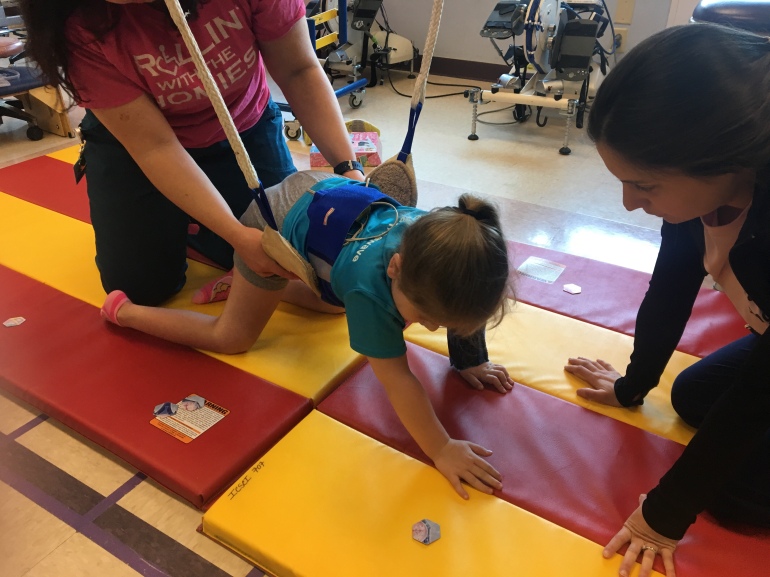 I have been speaking with our therapists about the best equipment to keep at home for home therapy so our PT provided us with a list of recommended items. Everything on the list is something that is used at KKI and can be used for sessions at home, something that will definitely help us since our outpatient clinic is over an hour away from where we live. Because of the cost and time of travel, we may have to consider cutting her outpatient therapies down to only a few days a week instead of every day like we had been doing, I had called Encore physical therapy on Canal Road in Orange Beach inquiring about transferring there, but the therapist cut me short and told me I needed to find a “developmental rehab” which I have been told is completely inaccurate. The therapist claimed she was very familiar with AFM, but I think she was confusing AFM with a different disorder. Anyway, hence the reason we are working so hard to have our own home gym.

The Amazon wish list can be found by clicking in the menu of this blog, then click “medical wish list”. I would share the link here, but for some reason the links do not transfer to the site when I am updating a post from my iPad.

Dr. Pardo, a pediatric neurologist at Johns Hopkins, is going to come and visit Annadelle on Thursday. He has treated and followed many AFM patients so I am curious to see what he says. His team has been hounding me about getting Annadelle’s MRI scans to him, but I wasn’t able to easily get them sent from USA Children’s and Women’s Hospital in Mobile where we were treated originally. Eventually his team was able to get them sent over.

Annadelle was scheduled to have her first school session today, but the teacher had written down the appointment time wrong so it began about half an hour late. I was not happy with the session because I clearly explained to the teacher what Annadelle needed to work on. Instead of doing what I asked, the teacher began to teach her about Martin Luther King, Jr. and asked her to read a small book about him. Like, she can’t read, so…not sure what she was thinking there. She was trying to get her to read words like “brotherhood” and “equality.” I eventually interrupted her and explained again that Annadelle could not read yet, that she only had a month of school prior to AFM and it had been hard for us to fit in much school time between medical care and therapies. The teacher then started rushing through the lesson and didn’t give Annadelle a chance to respond when she asked her questions. I ended up asking the nurse to take off education from our schedule which prompted her to call the supervisor. I wasn’t trying to cause trouble by any means, but I didn’t want to pack her schedule full with more stuff that wasn’t beneficial to her. I can do more with her on my own (which I have been doing as I get the chance), like having her practice letter sheets, writing her name, learning her sight words, and counting. I brought some school supplies with us to KKI so we are working with her as we get breaks. It isn’t much right now, but at least it is something. I think we will be able to catch her up before the end of the summer, God willing.

Acupuncture therapy went about as well as I expected it to. Jeff, the acupuncturist, was great with her. He explained that we would be placing the “stickies” (we don’t use the word “needle”) on her spine because that is where the injury is. She doesn’t have complaints of pain much, otherwise he would place the stickies at the site of the pain. But because it was her first session, he didn’t want to begin on her back and instead placed one sticky on each leg. She jumped a little bit at the first one and started to cry, not because of pain but because of anticipation that it was going to hurt. She dried her tears quickly and let Jeff put another sticky on the other leg. She still jumped a little but laughed about it. He kept the stickies in for about 10 minutes before he removed them. He asked if he could come back on Saturday to put some more stickies on and she agreed, so I’d say it was successful even if the stickies weren’t placed here it would be more beneficial.

My boo bear is now snoozing soundly with her doll she made in therapy. I am so thankful to be able to kiss her goodnight, something I was terrified I would never be able to do again.

Thank you for all of the continued support. Without the love and encouragement of friends and family, I don’t know how well we would have coped over the last few months. Your support means more than you know.

This site uses Akismet to reduce spam. Learn how your comment data is processed.

Take a Look Back